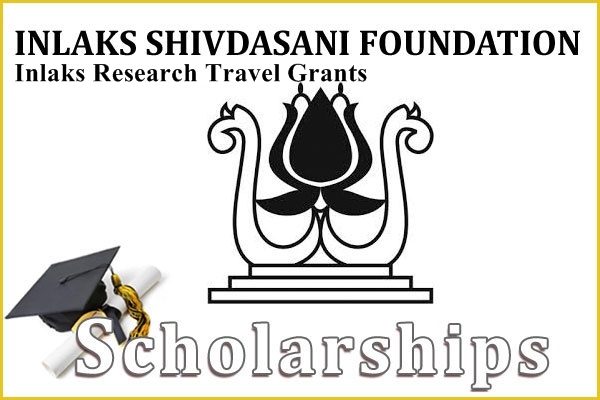 Inlaks Shivdasani Foundation formerly known as Inlaks Foundation is an approved charitable organization under the Charity Commissioners of the United Kingdom which was founded by Mr. Indoo Shivdasani in the year 1976. The major objective of the Foundation is to identify exceptionally talented young Indian students and support them financially to develop their special skill and talents to the maximum which is achieved by awarding scholarships. The foundation offers scholarships both in India and abroad to outstanding young students.

Young Indian candidates with exceptional talents can utilize the opportunity of Inlaks Scholarships provided by the Inlaks Foundation for their studies abroad. Inlaks scholarships are offered for two types of courses namely university courses and specific programs proposed by the candidate.

The award offers financial support for a maximum of 3 months at an university/institution/library abroad and includes:

•   Hold confirmed PhD registration at an Indian university for at least two years but for not more than four years
•   Have a first class degree at either Bachelor’s (Honours) or Master’s level
•   Be an Indian citizen, currently resident in India

Age Limit : Candidates seeking scholarships must be below 35 years of age on 31 December in the year of application.

The selection of the scholars are carried out through a two-tier selection procedure.

First round short-listing on the basis of the written record submitted by the candidate.

Second and final round: Personal interview of the short-listed candidates. Interviews may take place face to face (if feasible), or over Skype.

Note : The candidates short-listed for the interview will be informed by November . The final interviews will be held either November or December .

The following documents to be submitted

(i) Fully filled form for ‘Inlaks Research Studentship at the King’s India Institute’. The forms may be downloaded here : Application Form
(ii) Updated CV/ Resume limited to two pages only: PDF
(iii) Sample of written work on the subject of the applicant’s research. This should preferably be a draft (with full annotation and documentation) of a chapter of the PhD thesis along with details regarding the reading list, surveys, or any other work done towards the thesis. (3000-5000 words)
(iv) A written and signed statement from the applicant’s supervisor stating :
The candidate’s ability, focus and progress in the work done under her/his supervision
The candidate’s need to go abroad
That the funds for the visit cannot be obtained from any other source

Note : Additional recommendations (i.e. other than from the supervisor) should not be submitted.

(v) The completed forms and other documents must be sent by email to the address ‘india-institute@kcl.ac.uk’, with the title “Application for Inlaks Research Studentship”.

Note : The supervisor may prefer to submit their statement separately. In this case, they should send their statement directly to ‘india-institute@kcl.ac.uk’, with the email title “Recommendation for Inlaks Research Studentship: [applicant’s name]”.