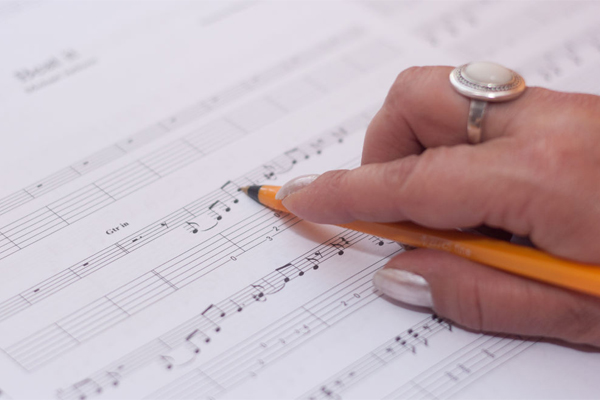 Music is a universal sound which can create emotions and express feelings. Music also soothes the mind. There is rarely anybody who is not touched by music in some way at some time in their life.

Making music is an inborn talent, one has to horn this talent by attaining training in this area. If you as an individual, is creative and have a passion and talent for music, is willing to put in typically long hours of work be it at nights or weekends, composing music could be the right career for you. At times an hour or two is enough to create music, but at others it could take days to create an original idea or a melody. It takes a lot of hard work, perseverance and patience to reach a level of success that you may desire. But even a single hit song could make your life worthwhile. Composing music is a source of self expression which can bring you immense satisfaction.

Composers aka song writers are people who create original music ranging from pop to jazz to classical. A composer creates and writes music, and combine it with lyrics to give a new song. Musicians in this field create music or lyrics alone or create both together. Composers are required to write music creatively based on their knowledge of sound, understanding of various musical styles and taste of the audience to which it has to be presented. A song writer or lyricist must understand the theme, mood, the audience and the music into which one is putting words.

Professional composers may do this for a variety of clients or employers. Some people write music to be recorded by others for commercial sale while others may write scores for theatrical or movie productions.  Composing can refer to an original piece of music, the structure of a musical piece, or the process of creating a new piece of music. Sometimes a composer has to be an arranger. An arranger has the ability to take a piece of music, and write parts for various instruments. They can change any part of a song to suit their needs. There are a separate category known as Jingle writers who specialize in writing music for radio and television commercials. Composers create musical themes and background for film, television / radio jingles, folk songs and for albums. They create musical works that can be performed by orchestra, voices, groups of musicians and soloists.

One interested in this career must train in music, maintaining focus on music theory, composition, and music interpretation. A composer must be able to play at least one instrument very well.  They can compose pieces of music, tape it on a recorder, try multi track recording, adding something new each time or building on it till they get a good melody. Composer must know the harmony and technique behind the music. Useful skills in composition include writing musical notation, music theory, instrumentation and handling musical ensembles (orchestration). Other skills include extended techniques such as improvisation, musical montage, preparing instruments, using non-traditional instruments, and other methods of sound production. Those in this area are often required to know about the business aspect of song writing such as copyrights, networking, publishing, contracts, performing rights etc.

Music composers often work with advertising firms, production houses, recording companies, music publishing firms, film, television, radio etc. Jingle writers can get in through contacts in ad firms and production houses, contacts with directors / producers help to get in film/ television companies. Today the advent of satellite television, the growing popularity of the music channels and corporate sponsorship of musical events, has all made music big business. Although fame and money in this field depends a lot on luck and getting a good break, but once you are established there is ample scope for making good money in this field.