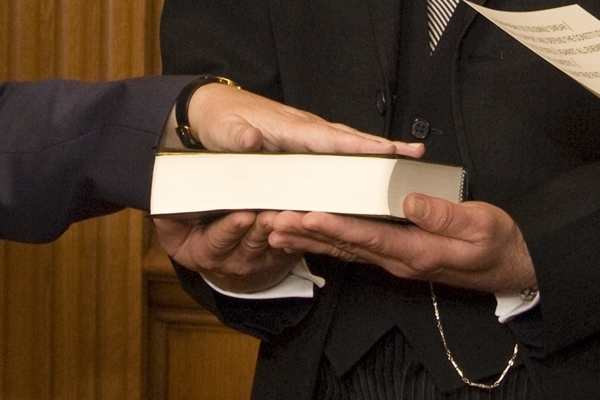 Career as an Oath Commissioner

Oath - the solemn declaration that a statement is true - is used to confirm an affidavit in legal cases. The oaths should be taken before an Oath Commissioner, as he/she is the individual responsible for certifying the affirmation. Appointed by the Registrar of High Court under the provisions of the Law, Oath Commissioner alias Commissioner of Oath are persons authorized under provincial or state legislation to administer and witness the oaths or affirmations in the taking of an affidavit for any legal matter. They are also empowered to witness any declaration as required under a statute.

Commissioner of Oath can administer oaths and take and receive affidavits only for the purpose of court proceedings. Before the beginning of court proceedings, Oath commissioner take the oath from the deponent or declarant (those who taking the oath) in the manner prescribed by law. They have to certify that oath has been properly administered in his presence. This requires that the deponent be physically present before the commissioner of oaths. Before signing the documents, Oath commissioner must be satisfied about the authenticity of the deponents identity and signature, by verifying the original documents.

The legal functions and duties perform by oath commissioner involves :

Eligibility to become an Oath Commissioner

To become an Oath Commissioner, a person should pursue either five year or three-year bachelor's degree in LLB. Minimum qualification for 5 year LLB program is 10+2 and those who have completed graduation or post graduation in any stream can pursue three year L.L.B course in any institute. Most universities/ institutes admit candidates to the LLB course on the basis of CLAT (Common Law Admission Test), conducted every year. CLAT consists of questions from topics such as Legal Aptitude, Logical Reasoning, English including Comprehension, General Knowledge/Current Affairs and Elementary Mathematics. After obtaining the LL.B degree one has to enroll as an advocate in any of the State Bar Council to become a practicing advocate.

Generally practicing advocates with below three years and above two years of experience can apply for the post of an Oath Commissioner. Their annual income should be less than an amount as prescribed by the state district court as from time to time. In some cases, fresh law graduates can also apply for this post. If the registrar is satisfied with the application, they may consider and grant a certificate of appointment as Oath commissioner with the approval of the High Court. It should be noted that one should apply for the post of Oath commissioner before their five years of practice. Oath Commissioners are also appointed at the Headquarters of each district and at each station where there is a Subordinate Judge. They may also be appointed at Headquarters of Tehsils where there are no Subordinate Judges.

An oath commissioner is appointed for a particular period and for a particular court complex. He/ she is expected to be available in that particular court complex during the period of commission. Oath commissioner should attest the affidavits only at the places designated by the bar association of that court. Usually the term of an Oath Commissioner is valid for a period of three years. They can continue with the post only by renewing the certificate every three years by the District Judge with prior approval of High Court.

Remuneration of an Oath commissioner depends entirely upon his knowledge and services. They can charge fees for administering oaths or taking declarations or affirmations as prescribed by law. Commissioners may charge fee for each affidavit. Every oath commissioner should keep a register in the prescribed form to enter the fees charged by him and also grant receipts for the money received by him.

Institutes
VIEW MORE...
Information
About Us
Advertise with us
Enquiry
Sitemap