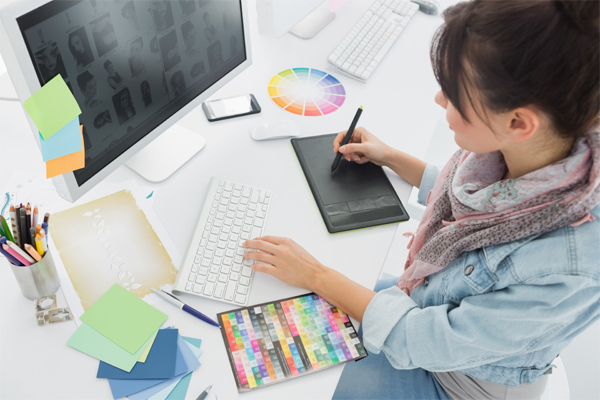 Graphic designing as a career is the right choice for you if you love to draw and sketch. Graphic design is a globally universal skill, therefore it is possible for you to work all over the world. Due to tremendous growth of the media industry there is excellent employment options in this career area. If being your own boss appeals to you, then graphic design is a compelling career choice.

There are a variety of graphic design jobs for those interested in this field. You have the freedom to choose which area of graphic design you'd like to pursue based on your talent. Graphic design career opportunities include: creative directors, layout artist, Flash designer, web designer, multimedia designer, logo designer, brand identity designer, prepress technician etc.

Creative directors/Art Director: Creative directors are also called art directors, they are hired by different types of media outlets - particularly advertising agencies, magazines, newspapers and television networks. Art directors manages the team that consist of artists, graphic designers, photographers, copywriters and production staff. These people are the ones who do a lot of the less creative work in a design studio. However, over half of art directors are self-employed or freelance.

Layout artist: Layout Artists are in charge with the structure and layout of images and text for print media such as magazine works, flyers, posters, etc. They are required to have knowledge and experience in using various computer software's like Adobe Illustrator, Adobe Photoshop and Macromedia Freehand. Employment opportunities for layout can be found with advertising agencies, magazine and newspapers, public relations firms, and manufacturers. There is also a strong demand for freelance layout artists or in-house layout artists.

Logo Designer: Many graphic designers specialize in logo production. They are hired by companies to produce signage, in-office products, and even marketing and promotional materials. A logo is a brand identity image, or a tag of a company or product. A logo is a tangible concept that provides a company with a visual image, and that fosters recognition by consumers. Similar to the brand identity designer, a logo designer works to mold the company's public image using color, type, and graphics.

Illustrators: Illustrators conceptualize and create illustrations that represent an idea or a story through two-dimensional or three-dimensional images. As an illustrator, you may find employment with magazines, periodicals, book and software publishers, manufacturers, or working with various types of electronic media. There are also opportunities in the motion picture and video industries, and computer game design industry as well. They work as freelance illustrator, and do work in several of these industries on a contract basis.

Web Designer: A graphic designer who specializes in coding can work as a web page or website designer. A web designer creates pages, layout and graphics for web pages. Their main task is to create an aesthetically pleasing and user friendly site. As a web designer, you will make decisions regarding what content is included on a web page, where things are placed, and how the aesthetic and continuity is maintained from one screen to the next.

The career of graphic designer is an exciting one that has many different opportunities, from working for a major corporation to owning your own online graphic design business. The graphic designers get a wide scope in creative media such as electronic media, packaging, film and animation, advertising agencies, marketing firms, design studios, educational institutes, printers and typesetters, exhibits and displays, audio-visual media, publishers, manufacturers and department stores. This is really a flexible career. You can work from the comfort of your own home and you can even use your skills in design to accomplish business projects.