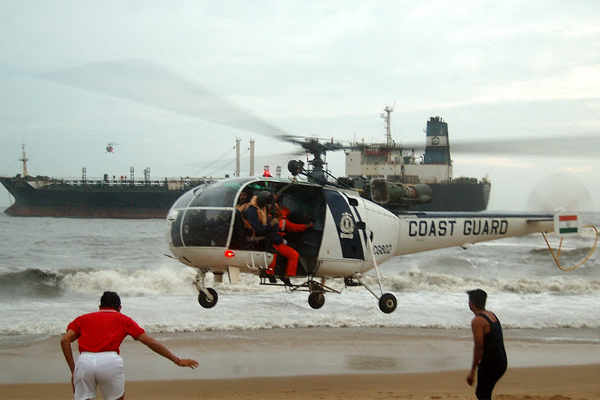 Indian Coast Guard (ICG) alias Bharatiya Thatrakshak is a branch of the Indian Armed Forces operating under the Department of Defence of the Union Ministry of Defence. Established on 19th August 1978, Indian Coast Guard is the fourth service created to guard India's vast coastline and for enforcing the maritime laws of the country.

The coast guards are responsible for the scrutiny of the Indian territorial waters and the Indian Exclusive Economic Zone to prevent poaching, smuggling and other illegal activities. Besides conducting search and rescue operations, they also protect and preserve the marine environment of the country.

Indian Coast Guards are not a part of the Indian Paramilitary Forces. Coast guards works in close co-operation with the Indian Navy, Fisheries Department, Revenue Department and the Central and State Police Forces.

The motto of Indian Coast Guard is 'Vayam Rakshamah' which means 'We Protect'. The coast guards are the principal agency for enforcement of provisions of all national enactment in force in the maritime zones of India.

The mission of ICG comprise :

ICG is a challenging sea going career, suitable for those who are bold, intelligent and loves adventure. Both men and women can opt for a career in Indian coastal guard. As a coast guard one plays a vital role by protecting the national interests of the mother land. They have the opportunity to move around and visit different places within India and abroad. A career in Indian Coast Guard is a versatile field that offers great job satisfaction along with good pay and abundant perks.